Blog – How will the election result effect business? 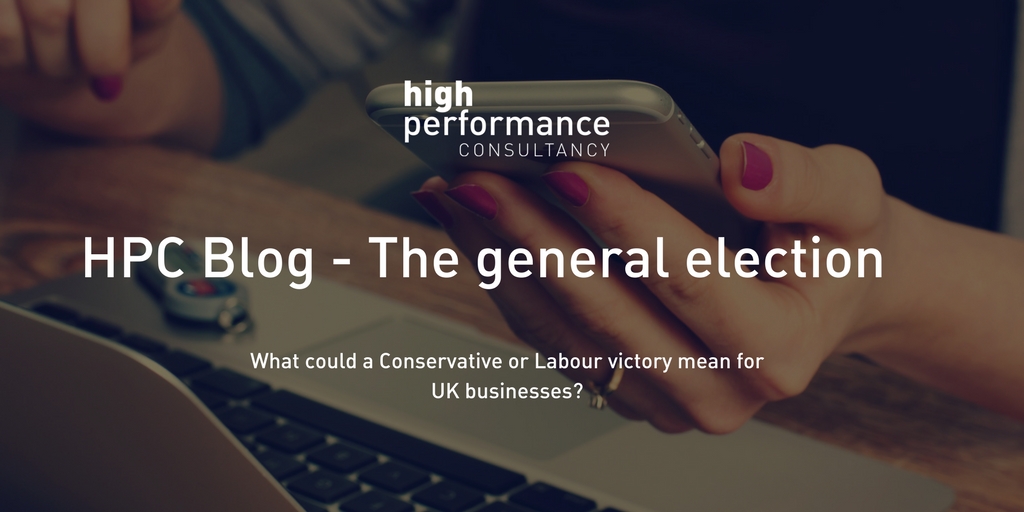 The shock general election set to take place on June 6th, less than 2 weeks away at the time of writing, has thrown many questions on what the economic implications will be in the UK. The main parties vying for power, Labour and the Conservatives have vastly different approaches, perhaps refreshing after years of similar policies between the two, but none the less makes it very hard to predict just what will happen. HPC have provided a guide on some of the issues we think will come up and how each party will use their power should they be elected.

Each party comes into the Brexit negotiations with different aims that could potentially change the UK economic environment.

The Conservatives approach the leaving the European Union centres around controlling the flow of migrants from the EU, while keeping many agreements with their European Partners. This means that any businesses depending on these migrant workers will definitely be effected negatively in some way. They also intent to convert all European laws into UK laws, with the right to appeal or change some aspects, this means there could be changes to employment law once we leave the EU.

In the Independent Luke Bartholomew, investment manager at Aberdeen Asset Management detailed the general consensus on what Theresa May will do if re-elected: “The election should hand Theresa May a much bigger mandate to stand up to the harder line, anti-EU backbenchers which currently hold a disproportionate sway over her party’s stance on Brexit. That would be welcomed by financial markets.” PM May is being pressured within her own party for a drastic exit from the EU, an election victory may give her more power to reject their opinions in favour of more sensible financial management. However, the Conservatives intend to vote in BOTH Houses of Parliament on “final agreement” for Brexit, so this issue is one that could develop.

The Tories intend to ensure foreign ownership of companies controlling important infrastructure does not undermine British security or essential services, their aims are to gain foreign investment but protect interests of UK business.  Ed Cooke, chief executive of retail industry body Revo, commented on this issue “Given the ongoing economic uncertainty and wavering consumer confidence, retailers in particular would be forgiven for thinking they are fighting a war on two fronts, should these policies be implemented.” The overall picture is that economically the Tories could continue with their policy of austerity and leave little room for growth for UK businesses, multi-national corporations with their vast financial power are the only ones really sure of their standing.

Corporations traditionally do well from Conservative government in the UK and it should be no different if they are re-elected, particularly in the form of a promised 17% cut in corporation tax by the year 2020. Smaller businesses are likely to harshly effected by anything that strengthens the giants of the field, there will be less room for their own expansion and they will be harder to compete with.

Labour intends to work closely with the EU and “build a close new relationship with the EU” prioritising jobs and workers’ rights in their plans. UK business could still retain the benefits of a single market and customs Union as migrant workers will not “scapegoated”, for instance Labour do not plan on taxing companies who employ foreign workers. They will also retain many of their EU given rights and the opportunity to seek employment in Britain, the government will seek to have this also employed for Brits living and working abroad. This is attractive to business who rely on these workers and would come into difficulty with a more drastic Brexit negotiation. Adam Marshall, director general of the British Chambers of Commerce says of this: “Many business communities will understandably be concerned that attention will inevitably shift from the economy and the intricacies of leaving the EU to a potential election campaign. Firms will want to be reassured that the key challenges facing the economy will be front and centre throughout any election period.” It is clear that businesses who need reassurances over this will side towards Labour.

In Scotland Labour plans to establish a Scottish Investment Bank, with £20bn for local projects and Scotland’s small businesses, creating work and stimulating the economy They will reinstate the lower small-business corporation tax rate, A National Investment Bank as part of a plan to provide £250bn of lending power over the next decade for infrastructure. Their plan seeks to invest in local UK businesses, in the hope that it will stimulate more growth than a continuation of Tory austerity. Andrew Goodwin, lead UK economist at Oxford Economics (Business Insider) “The more expansionary fiscal plans of Labour and the Liberal Democrats would boost both demand and supply, yielding stronger outturns for GDP growth compared with the Conservatives. By the end of 2021-22, the level of GDP is 1.9pp higher under the Liberal Democrat plan than under the Conservatives’ proposals, while under the Labour approach, real GDP would be 1pp higher than under the Conservatives’ proposals. It is possible that these results are understating the potential gains under Labour.”

A surprise Labour victory would be likely to affect larger businesses somewhat negatively, their manifesto doesn’t have any of the same tax breaks for multi-million pound companies that the Tory manifesto does. For example, put the Government back in charge of railways, instead of firms like Virgin Trains East Coast & a halt to private companies buying parts of the NHS. Income tax rate 45p on £80,000 and above. They seek to end Zero-hour contracts, expanding employee rights and boost wages of 5.7m people earning less than minimum wage to £10 an hour by 2020. This will mean more money needs to be used to pay employees, which could harm some businesses who rely on cheap labour. They also seek to raise £48.6bn in taxes, this will come from higher income individuals and businesses.

Wondering what the election could mean for your business? For advice & guidance from a UK leading specialist in Employment law, HR and Health and Safety Services, please get in touch with High Performance Consultancy. We can be contacted on the form below or call us directly on 0844 800 5932.