When large corporations get it wrong – By Eluned Ward 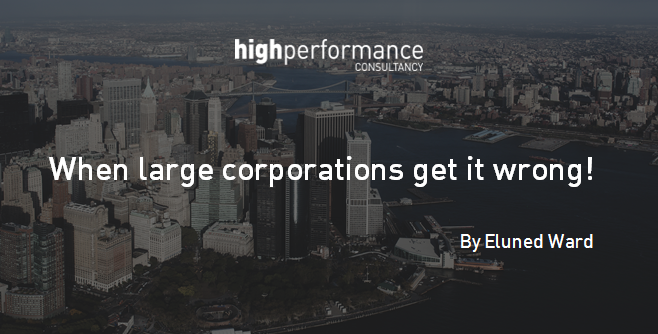 You would have had to been hiding under a rock for the last week to have missed the two big news stories around HR, with the first one being the employment tribunal case between Chelsea and Carneiro which resulted in a confidential private settlement between the two parties along with a very public apology from Chelsea Football Club to Eva Carneiro.
Eva brought a claim for Constructive dismissal along with a claim for sex discrimination and harassment against the former Chelsea manager Jose Mourinho. The basis for the claim was how Jose treated Eva after she went on the pitch during a football match to provide medical care to a player. Following the match, Jose publicly criticised Eva’s conduct calling her and another colleague “impulsive and naive” and she was subsequently demoted from first-team duties. As the claim was privately settled before a full hearing, we don’t know the full facts or evidence that was going to be presented by either party but one point was what Jose called Eva as she went on to the pitch. Eva alleged that Jose call her a “daughter of a whore” in Portuguese when she ran on to the pitch. But in a witness statement, Mourinho claimed he shouted “filho da puta”, which means son of a whore, and that it was not directed at the doctor.
The difficulty for Chelsea was they had a person that was in a key and very public role in the organisation who on the face of it did not act in a professional manner and the perception of the employee was it was sex discrimination and harassment. At the time of the incident, Chelsea would not comment on the incident stating it was internal staffing matter and some people could have taken the view Chelsea were condoning Jose’s conduct. Most companies would not normally face the amount of public scrutiny over how it manages it staff but they can still learn from Chelsea:
• Ensure objectivity and fairness in your approach when dealing with employees, whilst you may not want to upset your best performer by not doing anything it could cost you more in the long term
• Ensure employees understand fully what is expected of them, being clear in their contracts and job description
• Enable employees an opportunity to raise any issues or concerns about other people’s behaviour/conduct towards them and ensure neutrality when discussing the matter
The other big news story is the grilling of Sports Direct CEO, Mike Ashley, by MPs over its poor employment practices predominately in the distribution centre, with the unions accusing him of have Victorian workhouse conditions. Some of the practices which have been highlighted as part of an expose by the Guardian newspaper included:
• A strict disciplinary system which after being issued six strikes the employees were dismissed. Employees had been issued with strikes for spending too long in the toilet, chatting excessively, being off sick, having time off for maternity, which resulted in one employee being so worried about losing her job she gave birth in the toilets on site.
• Employees having to go through security searches at the end of the shift that took a significant period of time resulting in employees in effect remaining at work whilst not being paid so dropping their average pay below the national minimum wage
• The use of zero-hours contracts when the employees were consistently offered work and expect to accept all shifts. Failure to do so could result in contracts being terminated.
• Some staff were paid through a pre-paid card. Staff were charged £10 to get a card, plus a £10-a-month management fee, 75p to use it at an ATM machine, and 10p when they got a text message confirming they had used it. By applying these charges it meant employees were having to pay to access their own wages and could argue they were being paid below the national minimum wage
Mike Ashley has admitted that Sports Direct had got some of their HR practices wrong, and whilst I would hope most companies HR practices would not result in them being likened a Victorian workhouse, companies still need to ensure due diligence over its practices. The key points for companies to consider are:
• Ensure that any disciplinary procedures are fair, following the ACAS Code of Practice and take into consideration any mitigation put forward ensuring that indirect discrimination does not happen when applying a criteria particularly around triggers for absences
• Keep a record of the hours employees work, to ensure that it doesn’t take them below the national minimum wage
• If you introduce a system or procedure, ensure it does not delay them from leaving at their normal time without any compensation i.e. TOIL or pay.
• Ensure that the use of Zero Hour Contracts are not being abused. Ideally they should only be use if the work demands are irregular or where there is not a constant demand for staff. Therefore you need to keep good records on when workers on zero hour contracts are used. If they are working regularly and/or a set pattern, consider changing them to a different type of contract
• Do not put any systems that penalise employees on the way they are paid i.e. putting in place an administration charge if the employee is paid by check
Whilst both cases seem extreme, it is a good reminder to ensure that your HR practices are applied fairly and consistently, allowing employees to raise concerns which are addressed.