Election result – What does a hung parliament mean for HR & businesses? 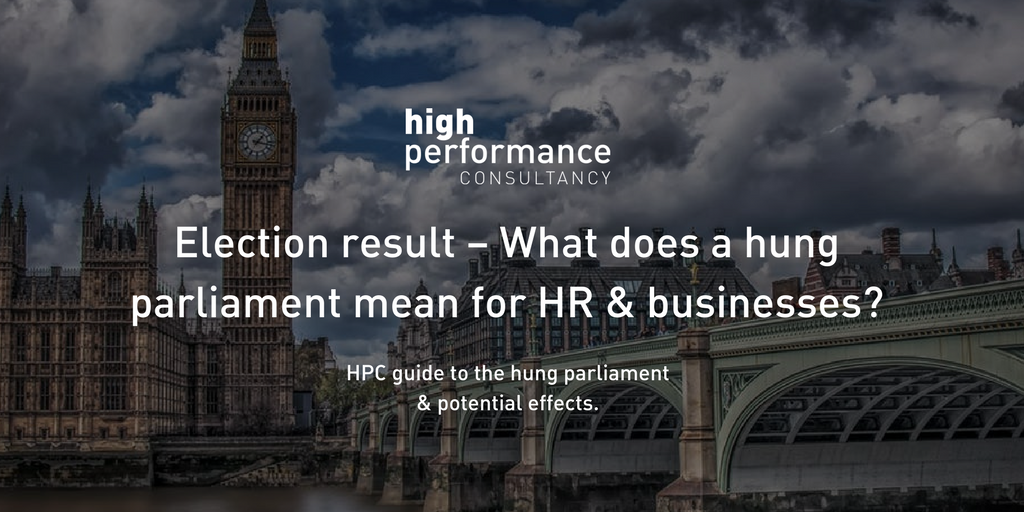 Election result – What does a hung parliament mean for HR & businesses?

So the results are in… kind of.  The result of a hung parliament in the 2017 General Election is a massive surprise given The Conservatives advantage just over a month ago when campaigning began.  Jeremy Corbyn managed to drastically cut the gap for Labour.  To win outright and gain a majority a party must win 326 of 650 seats in the House of Commons.  So the Tories 316 seats and Labour’s 261 leave us in political limbo.  However, this is not without precedence, as in 2010 we also had a hung government.  Parliament is due to meet for the first time on 13th June.  Here we have High Performance Consultancy’s guide to what might happen next;

What does a hung parliament actually mean for the future of businesses & HR?

Tory policies that they initiated in their manifesto (check out our earlier blog on the party manifestos) are no longer guaranteed to come in, as they don’t know if they can get majority votes to pass them through. This means that the Conservatives will have to form a coalition government led by them but supported by another party, combining their total amount of seats together.

The political limbo we are in is likely to mean nothing is going to change with regards to employment law, as the government isn’t in a position to pass through any legislation.  Under a Conservative government their manifesto stipulated no drastic changes to legislation and their arguments were based mainly on a strong Brexit negotiation which starts on 19th June. Labour on the other hand provided many changes to current legislation as well as Brexit talks, each parties aims would be slightly delayed but for the Tories it isn’t a big hindrance.  For business overall, a hung parliament will likely send markets to fall and a lack of manifesto from the conservatives could affect Brexit talks, resulting in bad news for British jobs.

The most likely coalition government at this moment would be The Conservatives joining with The Democratic Unionist Party, Northern Ireland’s biggest party. They share many similarities in their policies and opinions with The Conservatives, the DUP are also strongly against Corbyn being given power. This stems from Corbyn’s link to their rivals Sinn Fein. Alternatively, Theresa May or her successor could also lead a minority government but only in the unlikely event that other parties back her in a vote of confidence.

Failing a Tory led coalition being agreed, however unlikely that is now, Labour could also potential join forces with the SNP (Scottish National Party) or the Green Party. Both are open to this, but at this point it is very unlikely. If all else fails and nothing can be agreed between the parties then we could face another general election, this would be likely to be scheduled for August, leaving us with little movement in regards to legislation and Brexit negotiations put on hold.

What could the effect of delays have on UK business & Brexit?

Brexit negotiations were set to begin in 10 days’ time, already a tight timescale for the new government, thrown into further disarray by the result of a hung parliament. This of course would mean any Brexit related legislation changes are going to be postponed, things in the UK business world would remain how they are now. EU Commissioner Gunther Oettinger said that talks about Britain leaving the EU would likely now be postponed, speaking to German radio, he said: “We need a government that can act. With a weak negotiating partner, there’s the danger than the negotiations will turn out badly for both sides… I expect more uncertainty now.”

The main questions, such as how the Tories would replicate EU to UK law or how Labour would/could re-structure the taxation of big business, are still to be answered. Unfortunately, we can’t get these answers straight away.  For now, we are in another period of uncertainty until the new government is formalised and the proposed new laws are passed.

If you have any queries regarding your business and the election then please get in touch with High Performance Consultancy. We are a UK leading specialist in Employment law, HR and Health and Safety Services, contact us on the form below or call us directly on 0844 800 5932.