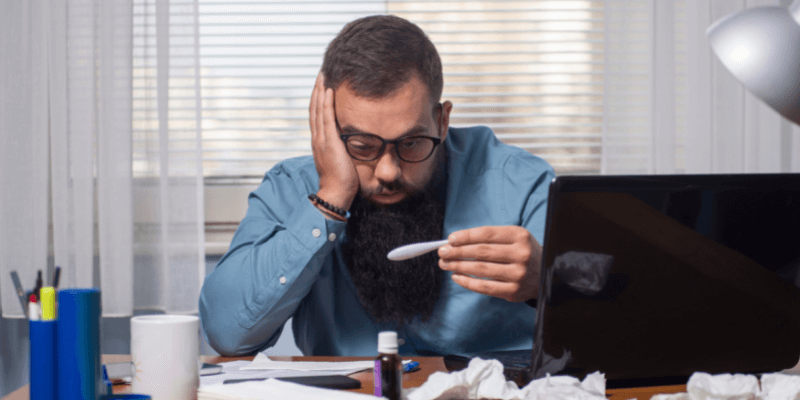 Nearly 150 million days were lost due to absence in 2021 as experts offer advice to employers returning to the workplace.

Recent research has uncovered that absence rates have risen to the highest level recorded in over a decade, with Covid-19 being responsible for almost a quarter of all days lost. The data from the Office for National Statistics (ONS) revealed that the sickness absence rate in 2021 was 2.2%, an increase of 0.4% from the 1.8% seen in the previous year.

This is the highest rate that has been seen since 2010, reported the ONS, with nearly 150 million days lost due to sickness or injury overall, an average of 4.6 days per person.

The findings from the Office for National Statistics displayed that the pandemic had the largest impact on absence in 2021, with 24% of all sickness-related absences being attributed to Covid-19, a staggering 14% increase from the year before. The ONS also revealed other common reasons for working days lost including diabetes, food poisoning, and accident-related injury.

Karen Watkins, founder of rowan consulting has argued that the data highlights the need for employers to keep absence as a priority. “What we should take away from these findings is that the exhaustion and health issues clearly experienced by certain groups during the pandemic are not exacerbated through the assumption that we are ‘getting back to normal”

The data, which consists of around 1,000 individuals, uncovered worrying trends in the statistics. One such trend is the higher rates of absence amongst women than men, a theme continuing to grow since 1995. Both groups of participants saw an increase of around 0.3% from 2020, with women losing an average of approximately 2.6% of their working hours due to sickness or injury, whilst men lost an average of 1.8%.

Further disparities were found across occupations with The ONS finding that those working within care, leisure, and other services occupations saw the highest sickness absence at almost 4%. Following these occupations are process plants and machinery at 3.6% and elementary roles at just over 3%.

Individuals in management and senior roles saw the lowest rate out of all workers at around 1%. Those in roles relating to technology and skilled trade workers also saw a low absence rate of 1.7% and 1.9% respectively.

In addition, those working in part-time roles saw a different absence rate from those in full-time roles, with the former seeing a much higher rate of 3% in comparison to the latter, with a rate of 1.9%.

Finally, the Office for National Statistics uncovered a difference in the days lost around the UK, finding that London saw the lowest rates of days lost at around 1.7%, which is 0.5% lower than the UK average. Opposite to this, Wales has been found to have the highest number of days lost due to sickness and injury, seeing a rate of 2.8%.

Founder of training company Propelelo, Helen Tinnelly, believes it is no surprise women and carers were more likely to lose working hours to sickness absence. “Women need employers to provide more emotional support, flexible arrangements and inclusive workplaces” she stated, continuing, “Employers that invest in women’s emotional support benefit from greater loyalty, engagement and productivity from the women in their teams.”

How Can HPC Help?

As the report from the ONS shows, numerous working days have been lost due to absence over the previous year, highlighting the importance for employers to have effective absence management systems in place.

At HPC we understand that failure to manage absence can be costly for your business. That is why our team of dedicated HR professionals can offer you expert support that is tailored to suit your business’ needs and assist you in building a ridged and effective absence management system

If you are struggling with absence in your workplace or would like to discuss this article further, please get in contact with our team.