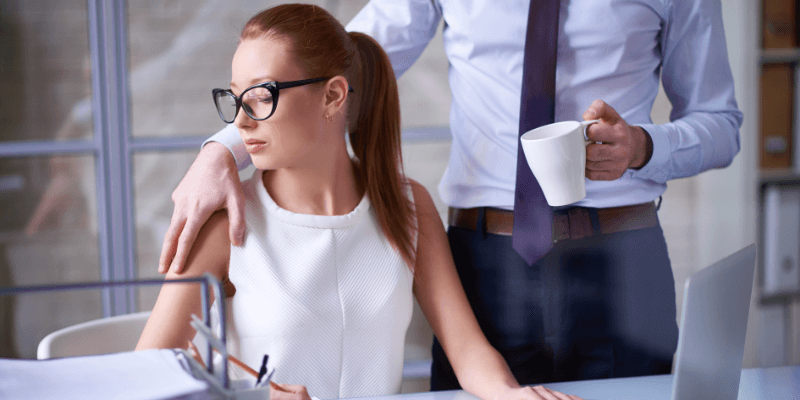 In this article, our Senior HR Consultant, Claire McGuinness, discusses sexual harassment in the workplace and what employers can do to tackle this issue.

Sadly, sexual harassment in the workplace continues to be a reality faced by many employees. In most cases, employers will be legally responsible for harassment suffered by their staff during the course of employment.

Definition of Harassment – The law

Sexual harassment is “unwanted conduct specifically of a sexual nature or related to gender reassignment and has the purpose or effect of creating an intimidating, hostile, degrading, humiliating or offensive environment for the complainant or violating his or her dignity”.

The law (Equality Act 2010) protects the following people against sexual harassment at work:

A single incident can give rise to harassment under this section and, if the conduct is of a sexual nature, the fact that similar treatment is meted out to men as well as to women is irrelevant, as is whether the conduct was intended to violate someone’s dignity or create a degrading environment.

The ideal outcome is of course to create a workplace free from harassment. However, if an incident does occur, an employer that can demonstrate that they have taken all reasonable steps to prevent the harassment may have a statutory defence to any claims that arise.

(a) The employer can show that it took all reasonable steps to prevent the act from occurring and that it acted promptly to deal effectively with the complaint as soon as it was drawn to a manager’s attention.

(b) The employer can show that the act did not occur “during the course of employment.”

Employers must do all they reasonably can to protect staff from sexual harassment and take steps to prevent it happening. So, what can employers do to minimise the risk of harassment occurring in the first place?

There are two basic steps employers should take, and many are already doing so. First, have a policy in place which explains what harassment is, that it will not be tolerated, and sets out a framework for addressing complaints and taking disciplinary action up to and including summary dismissal for perpetrators.

Secondly, training is important as it will help ensure the policy is known and understood in the context of the specific organisation.

Improving the quality of policies and training. To ensure policies and training are meaningful they must be complied with in practice. This includes communicating with all employees upon joining the organisation and periodically throughout employment. The material should be tailored to the organisation and attendees, and ideally be focused on sexual harassment rather than all equality issues together.

Diversity is key. A lack of diversity throughout an organisation, including at leadership levels, can increase the risk of harassment. We also know that certain groups are at greater risk, in particular women and where there is intersectionality of protected characteristics. By embedding diversity into all layers of an organisation, practices which reduce harassment are more likely to flourish.

Instilling personal responsibility for making policies a success and changing the culture. Everyone has a role to play in maintaining a safe culture. This comes in two key forms – the first is ensuring everyone understands that it is not acceptable to be a bystander. Secondly, those in leadership roles must be consistently proactive in supporting and talking about the policies and standards expected. Everyone should be a visible champion of the harassment free workplace.

Recognising environmental factors that create a higher risk of harassment occurring. Take time to consider where risks arise in your organisation. Many risk factors are common: high stress environments, late nights/long hours, working between just two colleagues (especially where there is a power imbalance), or any events involving alcohol or close contact. Once identified, consider what extra measures could be put in place to reduce the risk of harassment.

Until employees feel safe and supported in reporting harassment, an organisation may have an inaccurate view of whether a problem exists, its extent and as such how to address it. Ensuring there is an appropriate way for those with concerns to come forward helps the organisation understand what is happening, supports those affected, and may reduce the risk of incidents occurring. Appropriate levels of confidentiality and psychological support should be built into any safe reporting system.

We know that stale policies and training alone will not suffice. In practice, the ‘all reasonable steps’ defence is a high bar for employers to get over. However, by taking the actions set out above, they would be in a far stronger position to achieve the aim of avoiding harassment entirely, and failing which, to succeed with reasonable steps defence to any claims that do arise.

At HPC we can support you if you require expert advice on Sexual Harassment in the workplace, need to update or implement workplace policies, or provide Diversity or Dignity in the Workplace training. You can get in contact with our team of experts today who will help you to navigate through complex issues ensuring you remain within the law.